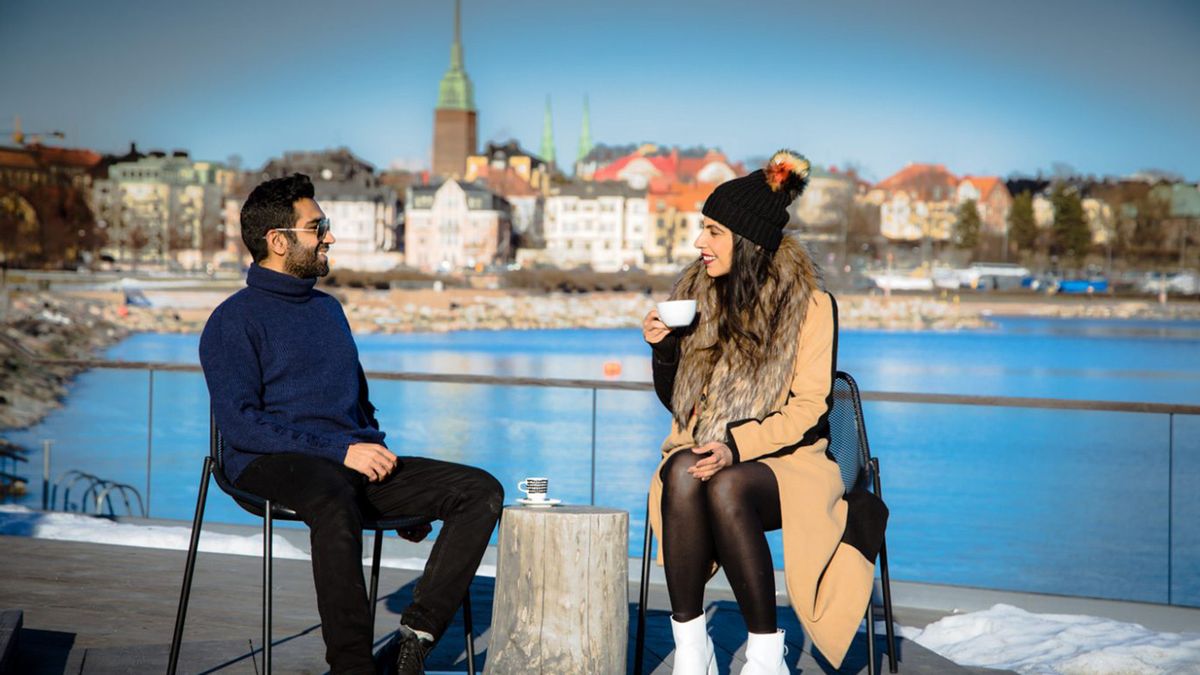 Full-time travellers, Savi and Vid, better known as Bruised Passports, have been on the move for over 12 years. After a decade of non-stop travelling around the world, the couple has finally decided to settle down and have moved to their new home in the national capital. Their travel experiences from across 100 countries are the ultimate post-pandemic vacation guide filled with bucket list experiences. Quiz them how they feel about settling down in their own abode after years of globetrotting and they reveal, "The Japanese and Scandinavian design sensibilities really inspired us to do this home in a more zen, minimalist, de-cluttered sort of way. We have incorporated a lot of play on black and white from the Scandinavia designs, and the zen elements come from Asia, specifically Indonesia and Japan," shares Savi.

But before the two decided to live a domesticated life, just before the second wave of COVID-19 hit India, they were in Rann of Kutch in Gujarat for the Rann Utsav. Prior to that, they had visited London, Tuscany and Ladakh. "It was a bittersweet experience. It felt nice to be able to travel again and see the excitement among those whose livelihoods depend on it. But, it was also tricky to manage with so many restrictions and adapting to the new normal,” adds Vid.

Read on to find out Savi and Vid's top picks and experiences in an exclusive conversation with Zee Zest.

Speaking of India, Savi says, "When it comes to shopping, I have a soft spot for Gujarat and Rajasthan, because they have the most beautiful handicrafts and handlooms. In terms of food, my top pick is Kerala because I love South Indian cuisine so much, I can have it every day."

While Vid enjoys North India; Delhi, Agra and Ladakh are his go-to destinations. Apart from the natural and architectural wonders in these destinations, he guarantees great food. They reassure us that, in fact, some of their best meals have been in India.

Five offbeat destinations around the globe:

With so much travel come many weird experiences and encounters, as well. Savi and Vid recall one such incident when they tasted crickets in Cambodia. "They tasted like fried chips. We wouldn’t have figured out what they were if someone hadn't told us. Other than crickets, you can also try fried spiders and fried tarantulas there," exclaims Vid.

The other memory they share is from their trip to Croatia. They accidentally drove into a scary-looking forest at night and got goosebumps seeing the locals ominously huddled around a fire. However, later, it was the same people who helped them find the right path.

Savi goes on to tell us about their trip to Nagaland for the Hornbill festival, where they met a lot of people and to understand their culture even visited a home in a village. "We had some of the spiciest food that we have ever eaten on our travels, but it was such an invigorating experience. They even make boiled eggs spicy and delicious. They also have a great fashion sense and I learnt a lot about the fabrics and hair accessories, too."

Both foodies, Savi and Vid do have their own preferences when it comes to food. While Vid would love to revisit Japan only for the food, Savi would go back to Thailand and Greece, to take cooking classes, explore little eateries, and learn to make the cuisine from scratch.

Not just eating, but the nomadic couple loves to cook as well, and don't shy away from making their own version of dishes they've tried on their excursions. "We tried a lot of the local bread in France and even took a mini baking course. We tried to bake it ourselves and it turned out to be good, but not as good as the ones we had in France," recalls Savi.

Parenting Lessons From Travels With A Tot

Vidit's go-to dish is Turkish eggs that they tried before it became a viral sensation. "We have it a lot for breakfast. We tried a curried version of fried eggs with some yoghurt and garlic, and it's delicious," adds Vid.

It's Time To Discover Goa With A Greener Perspective

Trailing Through The Woods Of The Gods, Kasar Devi In Uttarakhand

On The Moomin Trail In Finland

10 Places To Visit In Visakhapatnam For A Complete Experience

10 Romantic Experiences Across The Globe For The Most Luxurious Honeymoon

10 Things To Do In Doha That Are Absolutely Free

From Beaches To Historic Churches: 10 Best Places In Daman